Direction is the information contained in the relative position of one point with respect to another point without the distance information. Directions may be either relative to some indicated reference or absolute according to some previously agreed upon frame of reference.

The four cardinal directions or cardinal points are:

Their initials commonly denote these directions: N, E, S, W. East and West are at right angles to North and South, with east being in the clockwise direction of rotation from north and west being directly opposite east. 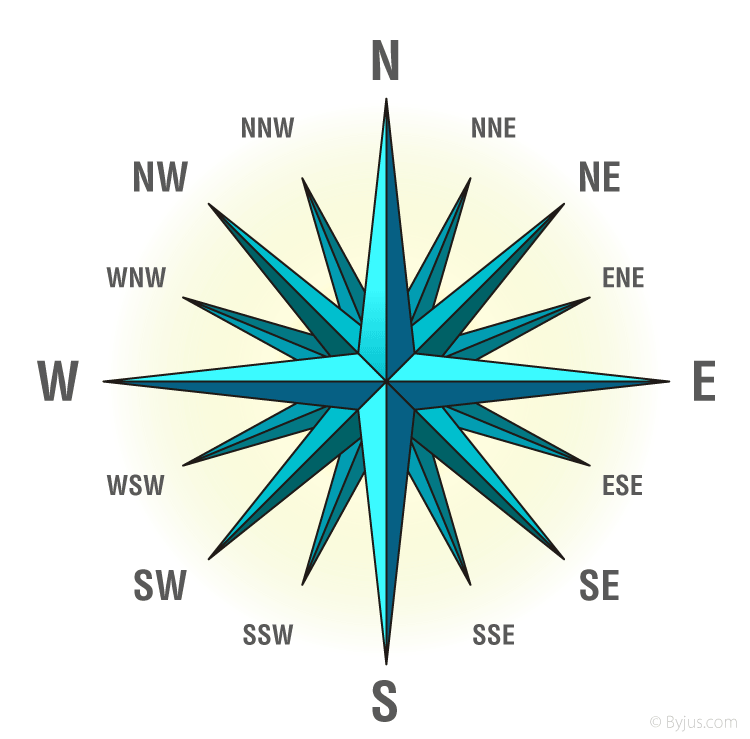 Representation of all 16 cardinal directions

The intermediate directions are further classified as:

The direction of the top of the page is always considered as North unless specified in the question.

Ex: The direction a person is facing at a present movement is always taken as north for convenience and thereby making the approach to solve the problem easier.

To explore Logical Reasoning in detail, check the linked article.

Given below are a few logical reasoning concept articles for candidates reference and to assist them with their preparation:

The right and left movement of a person is always with reference to the body moving in the scenario. It is not with respect to the person who is solving the questions. 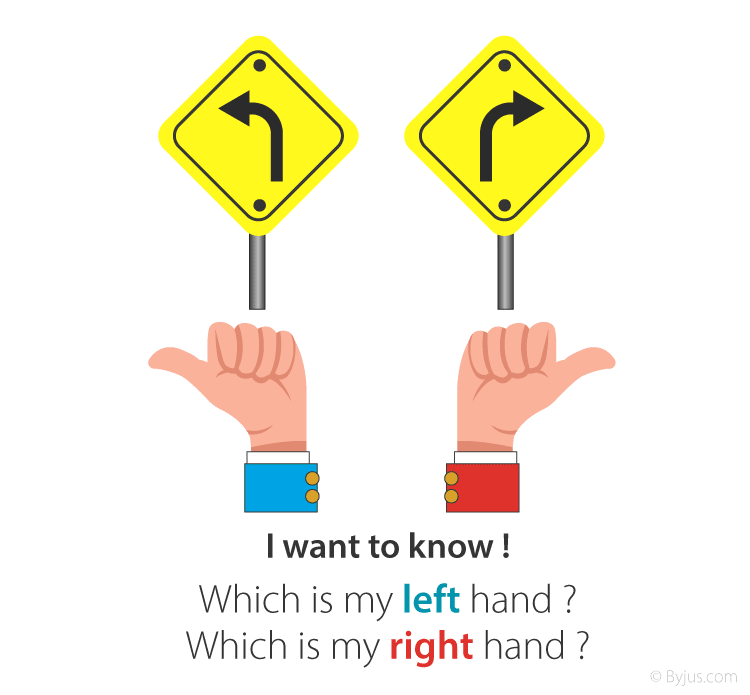 A person is walking towards you, and after walking for a few meters, he takes a right turn. Which direction is he moving?

Solution: The direction we are facing is always assumed as North. Hence, if a person is walking towards us, he is walking facing (towards) South.

Mr Deepak Mohan walks 5 km towards the south and then turns to the right. After walking 3 km he turns to the left and walks 5 km. What direction is he facing right now? 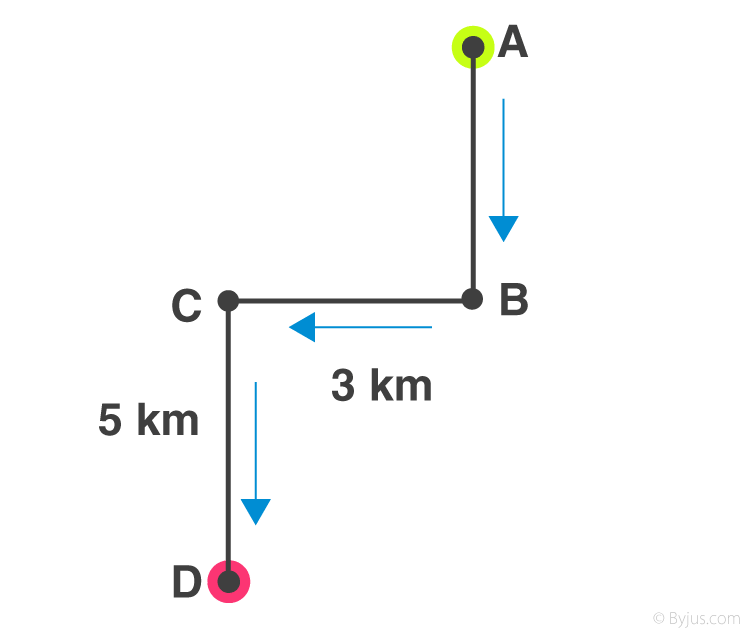 The path traced by Deepak Mohan

The right and left movements are with respect to Mr. Deepak Mohan. After walking 5 km towards the South, he takes a right turn and now will be facing West. After walking 3 more km he turns left and walks 5 more km. Now he is facing South.

Hence, the answer is option B. 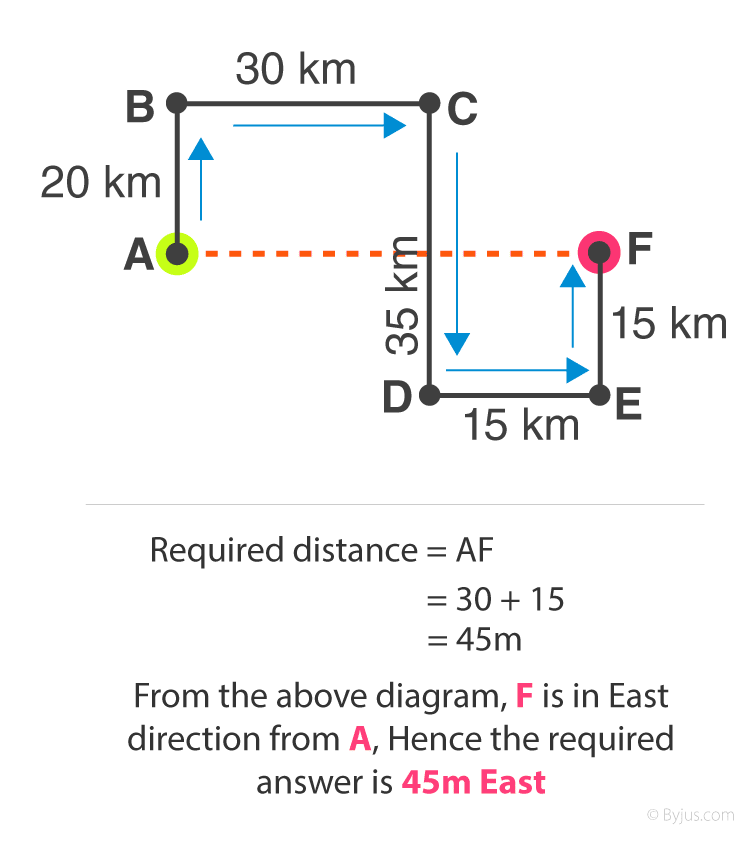 The path traced by Sowmya Krishnan 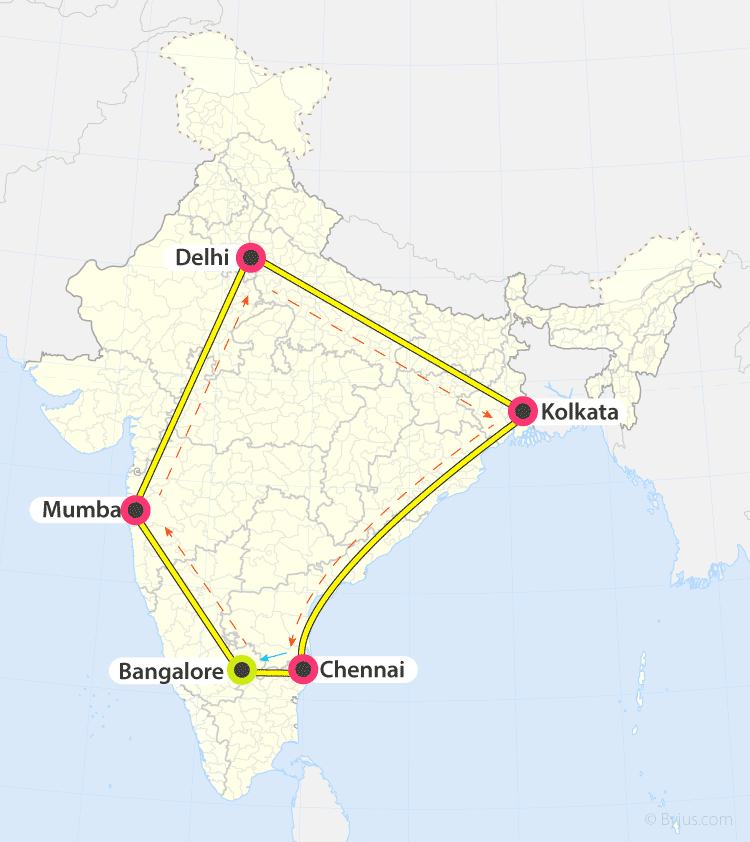 Option B is the correct answer.

Topic 3: The directions of sun rays and shadow

A boy is playing with a skipping rope in the playground and is facing North in the morning then, he observes that his shadow was towards his left as the Sun appeared in the East. The boy turned 180 degrees while playing, he is facing the South now. His own shadow will be towards his right as the Sun is in the east. 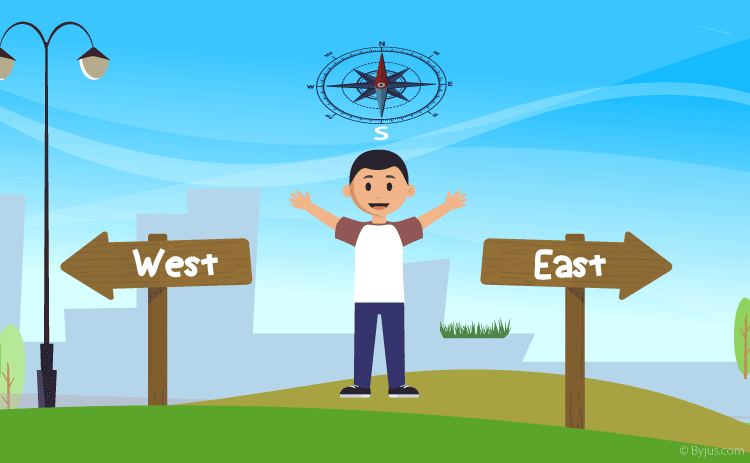 Sunrise/sunset and the shadow

The table below summarises the relation of shadow with respect to the direction and time:

One morning after sunrise, Nandita and Ravi were sitting in a lawn with their backs towards each other. Nandita’s shadow fell exactly towards her left-hand side. Which direction was Ravi facing?

Since it was morning and Nandita’s shadow fell exactly to her left-hand side, Nandita was facing North and hence Ravi should be facing South. Hence the answer is option D.

This section involves the comparison of two maps between which one is definitely wrong. One has to find the correct direction in the wrong map by applying logical analysis.

At a crossing, there was a direction pole, which was showing all the four correct directions. But due to the wind, it turns in such a manner that now West pointer is showing South. Harish went in the wrong direction thinking that he was travelling East. In what direction he was actually travelling?

The correct answer is option B, i.e., North.

All the pirates and travellers during the 16th and 17th Centuries used the compass as a navigation device which helped them in the discovery of the land that was unknown to mankind. The clocks were lacking directional information as the main task of the clock was just to tell the time.

Adding the directions to the clock paved the way to the invention of many ideas in the future. The direction in which the number ‘12’ exists was considered as the North for the reference. And all the remaining directions were marked accordingly. Hence, the numbers ‘3’, ‘6’ and ‘9’ were considered to be at East, South, and West, respectively. 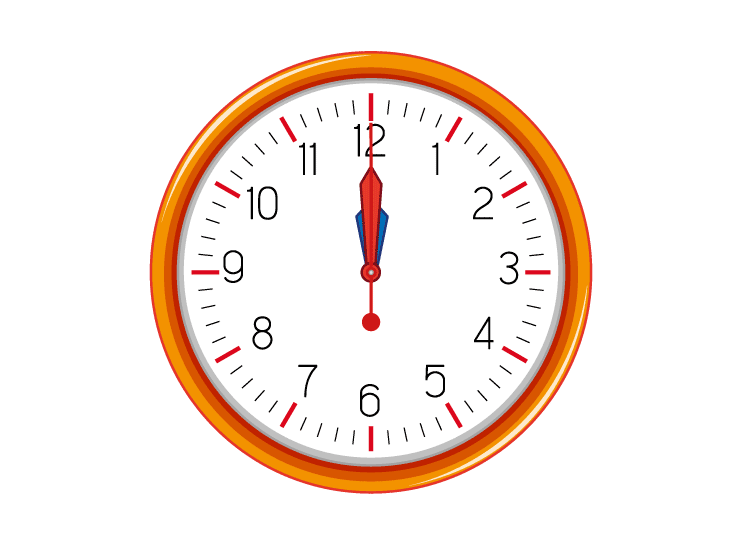 Pictorial representation of clocks with all the directions

A clock is so placed that at 2:00 p.m. the minute hand points towards North-west. In which direction does the hour hand point at 6:00 p.m.?

If the Minute hand is at 12 which is North-West, then at 6.00 p.m. the hour hand will be pointing at the number 6. Since the numbers 12 and 6 are exactly the opposite. The opposite of North-West should be South-East. Hence, option D is the correct answer.

Topic 6: Directions in board games

In this section, the directional concepts are applied to popular board games like Chess and Carrom board or Snake and ladder to solve the questions. 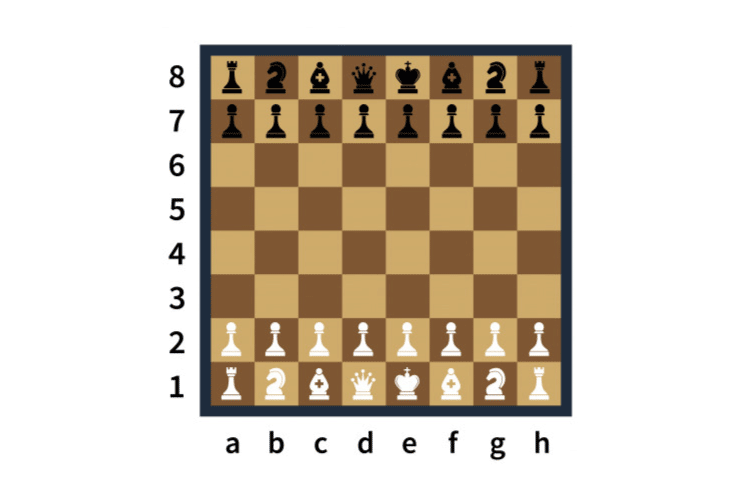 General placement of the chessboard

A chess piece undergoes the following motion during the game. It starts from D-8, and reaches H-5, from there it reaches A-3, finally, it moves to the position H-8 and dies. In what direction the piece was when it died if the chess board is assumed to be placed in front of you?

The H-8 is the position where the chess piece died. If the chessboard is assumed to be placed in front of us, then the position H-8 will lie in between North and east. Hence, the answer is North-East. 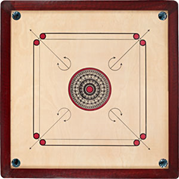 General placement of carrom board

This section involves the combination of directional logic with the seating arrangement.

Distance between K and P is

Since K and P forms the diagonal of the right angle triangle KQP the distance between KP is 1.41 km. Hence, option C is the correct answer.

Distance between K and R is:

Since R is in the middle of K and L which are 2 km apart. The distance between K and R is 1km. Hence, option D is the correct answer.